Well, well, well. Just days after the existence of Assassin’s Creed IV was confirmed – and with two days still to go until Ubisoft’s official “reveal” on the 4th – the above trailer’s been leaked, courtesy of GamesRadar. While the original video has since been pulled from YouTube, we can safely assume that October 29th will see the fourth major entry in the Assassin’s Creed franchise, just a year after Assassin’s Creed III.

Black Flag stars Edward Kenway, father of Assassin’s Creed III’s charming ne’er-do-well Haytham Kenway. As such, it will almost certainly be a prequel; and, judging by the trailer, naval battles (my favourite part of Connor’s journey) look set to play a prominent role. So far, so good; even if so far, so little in terms of gameplay. It undoubtedly looks pretty enough, a worthy successor to this, this and this.

His official Wiki entry confirms that Edward was an Assassin, an ‘occasional pirate’ (gotta love those New World hobbyists!) and, most importantly, an ancestor of Desmond Miles. Also, in a first for the Assassin’s Creed series, he’s blonde! Who said Ubisoft can’t innovate, eh? (His golden tresses certainly seem to have impressed Blackbeard, given how effusive the bloodthirsty buccaneer’s being with his praise.)

We’ll know more when Black Flag is officially announced on Monday. For a look at the box art and a spoiler-filled analysis on what all of this could mean, man, click on past the break. 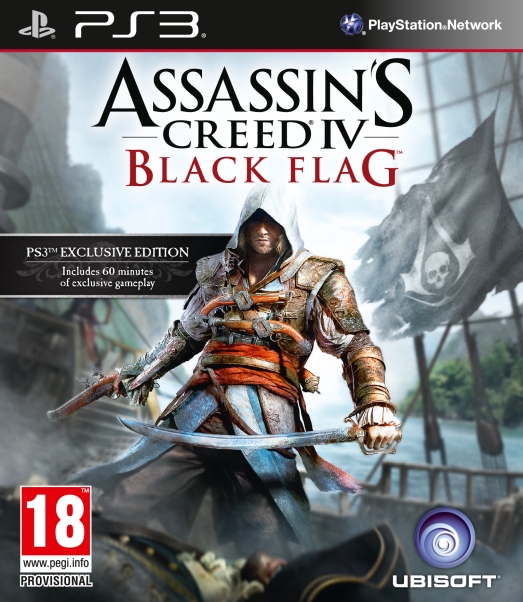 While the laws of logic indicate that Black Flag will necessarily be set before the events of Assassin’s Creed III, that doesn’t automatically mean that the present-day storyline will revolve around Desmond. For one thing, there didn’t appear to be a substantial amount of time between the end of Revelations – specifically, Desmond waking up from his coma – and the beginning of III; understandable, given that they were on a bit of a clock there. So, a return for Desmond looks unlikely. For what it’s worth, I don’t think we’re going to meet an all-new relative of Desmond’s, either – I think the likeliest options are that William Miles might follow in his son’s footsteps, or that we’ll have an Assassin’s Creed set wholly in the past. Whatever happens, Assassin’s Creed IV looks set to tread new ground for the series.