← Virtual reality? In Carmack we trust
At long last, it’s time to meet the Pyro →

In the distant future, three superpowers are locked in an endless war with each other over the scant resources left on the planet. The communist Celts, the theocratic Americans and the theocratic Vikings are all that remain of the dozens of nations that once existed on the planet; with all the other civilizations having fallen before their military might and been assimilated into their burgeoning empires. The war has lasted almost 2,000 years, and the stalemate just about half that. Nuclear fallout has swept the world, rendering large swathes of land uninhabitable. What arable land wasn’t irradiated is now mostly swamp, because it was inundated by the melting of the ice caps. Between nuclear annihilation and famine, 90% of the world’s population is dead. The survivors live in hellish suffering, as military production takes priority over absolutely everything else. Guerrilla uprisings sporadically occur, and are ruthlessly suppressed. The year is 3991 AD, and there’s no end to the war in sight.

Very Orwellian, no? The above paragraph isn’t inspired by 1984, or indeed any other pillar of the dystopian community – it is the state of affairs in a Civilization II game that’s been going on for 10 years. As he describes in this thread on Reddit, user Lycerius kept at it well beyond the game’s usual end point in 2020; because, as he says, “I thought that it might be interesting to see just how far into the future I could get and see what the ramifications would be.”

While the ramifications undoubtedly turned out to be pretty grim, he’s doing everything he can to fix the world based on suggestions he’s received from other Reddit users; and, what’s more, he’s also uploaded the save-game so that others can try their luck. It’s even spawned an entire subreddit – titled, appropriately enough, The Eternal War – dedicated to ending the war; it’s devoted to strategies,  comparisons and, inevitably, fan-fiction. (Update – at least one player has managed to end the Eternal War already; check out inigos’ account of his victory here.)

It’s been 16 – sixteen! – years since Civilization II released, and it’s still giving us amazing stories like this. This is why I love gaming.

While I highly recommend you read the thread itself, it’s possible you may not have the time to go through it. So, if you’re interested, join me after the break where I’ve posted a few of the more brilliant bits.

Every time a cease fire is signed, the Vikings will surprise attack me or the Americans the very next turn, often with nuclear weapons.

Anyway, I was forced to do away with democracy roughly a thousand years ago because it was endangering my empire.

I want to rebuild the world. But I’m not sure how. 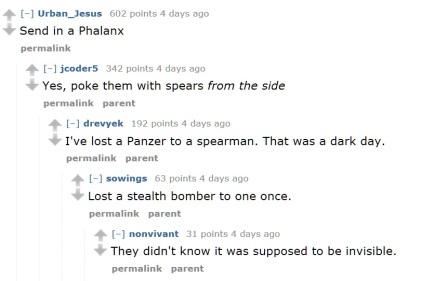 If you’ve played a Civilization game, this has happened to you.

← Virtual reality? In Carmack we trust
At long last, it’s time to meet the Pyro →